On the horizon: A New Vineyard

Most recently, Beaux Frères acquired a 22 acre parcel that bridges the gap between our two estate sites. In 2021, planting began for a 16 acre vineyard there, using vine material that is primarily descended from the oldest vines in the Beaux Frères Vineyard. Our expectation is to harvest the first crop from the site in 2023. 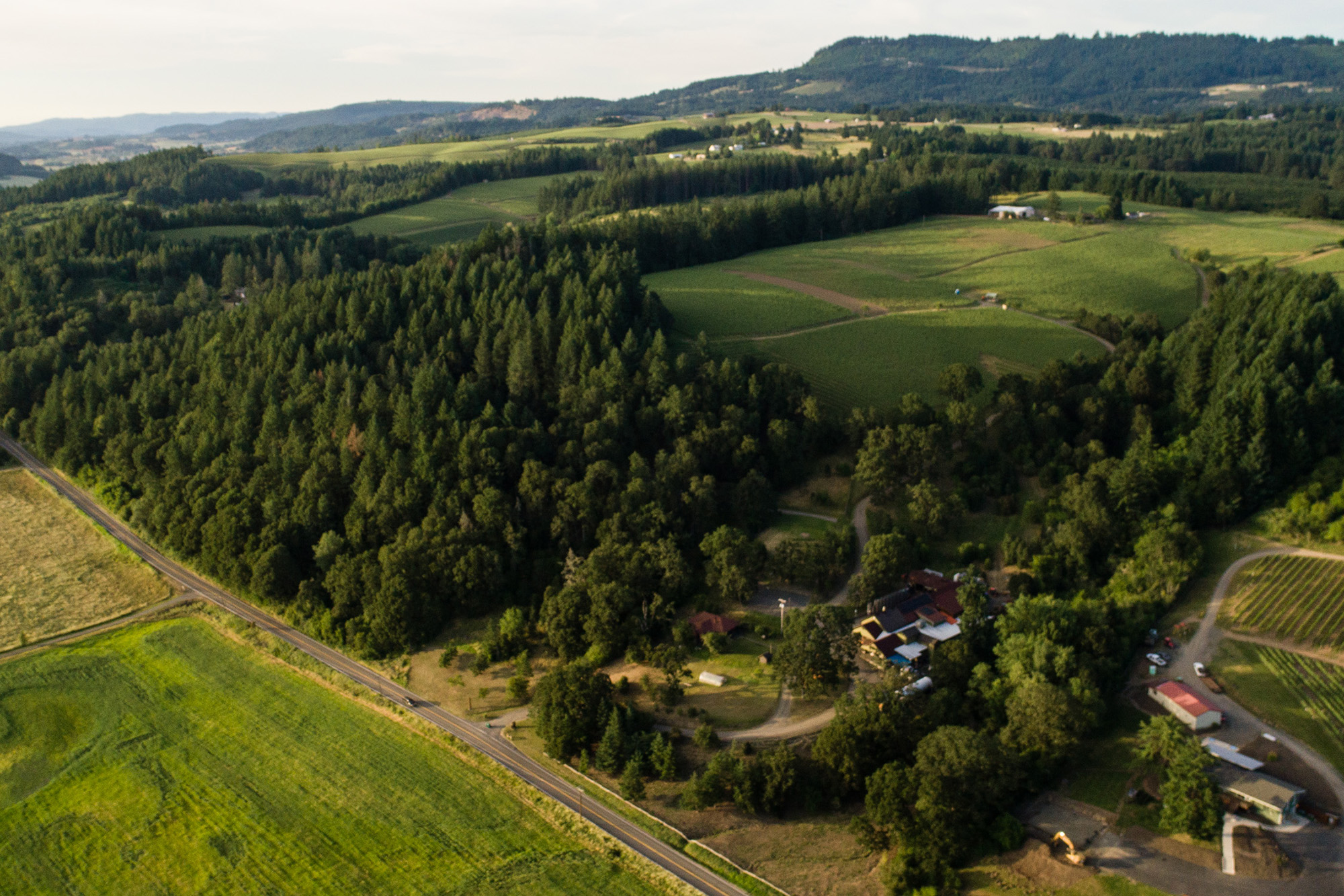 OUR HOME ON THE RIBBON RIDGE

The Beaux Frères Vineyard is located on an 88-acre farm atop Ribbon Ridge near Newberg, Oregon. Tall and stately Douglas fir trees cover nearly 50 acres of the farm, with homestead and winery buildings occupying another 8 acres. The vineyard is situated on 30 acres (24 of which are planted) of steep, contiguous southeast, south and southwest facing hillsides of Willakenzie soils at elevations of around 400 feet.

Planting began in 1988 with tightly spaced Pinot Noir vines at a density of about 2200 plants to the acre. The oldest vines in the vineyard are now a seasoned 34 years of age, and the vineyard as a whole is a mixture of own-rooted Pommard and Wädenswil clones and younger Dijon clones on phylloxera-resistant rootstocks.

The Upper Terrace Vineyard, just north and a bit higher elevation from Beaux Frères Vineyard, was first planted in 2000. It is comprised of Dijon clones of Pinot Noir covering about 9 acres of the 40 acre site – the rest densely forested and lush with flora and fauna.

The farm team has now begun its own nursery project, grafting healthy cuttings from our most exceptional vines onto resilient rootstocks that we hope to have in our vineyards for generations to come.

Several years back, we began exploring the ideals of biodynamic farming. We have found that avoiding commercial sprays in favor of gentle tonics like dandelion and stinging nettle tea leads the way to a symbiotic relationship with our landscape. We compost on-site, graft our own cuttings, and take great care to observe and connect with the vines regularly.

The beginning of the vintage cycle coincides roughly with the beginning of the calendar year. The winter months involve pruning the vine and the selection of a new fruiting cane. The vines are spaced at a density of about 2200 – 3200 plants to the acre and are trained in the single-Guyot method, with one fruiting cane per vine tied horizontally along the fruiting wire at about 24 inches above the ground. This is the season that we break open the soil to let it breathe. Compost and various soil amendments may be spread during this time.

Bud-break occurs shortly after the arrival of spring weather in the Willamette Valley, which is in mid-April or so on average. We will hand-rub off excess buds, selecting of the 8 to 10 or so preferred shoots. Following this is the time of the principal period of growth as the vine establishes its canopy. We take this opportunity to selectively remove grasses and weeds from beneath the trellis, remove suckers, and position the shoots so as to direct their growth upward within our vertical trellising system.

Flowering will normally occur at a point coinciding generally with the Summer solstice or about the third week in June. This is a critical time, as the size of the crop is determined by the success or lack thereof with the pollination of the flowers, the eventual berries. Here our technique involves a wing and a prayer, as we are left to hope for mild, dry and not too windy weather for a successful fruit set. After this time, ‘canopy management’ is the rule of the day. We pull leaves on the morning-sun side of the canopy and further train the canopy upward within the trellising system to allow for optimum exposure of the emerging bunches of fruit to the sun’s rays. The canopy will also be hedged back to avoid excessive vegetative growth and encourage the vine to focus its energies on its fruit.

Veraison, or color-change, will typically occur beginning in late July to mid-August, when the grapes are transformed from small and green to full dark clusters. During this time we may further thin the crop as necessary to manage the yield toward our goal of around 2 pounds of fruit per vine. The fruit of The Beaux Frères Vineyard is harvested by hand in the cool of early fall mornings (usually beginning just after sunrise and ending well before lunchtime) and placed into quarter-ton picking bins. The bins are removed from the vineyard by tractor and transported down the hill to the winery, where they are hoisted up and the fruit is slowly, gently tipped out over a sorting table. The fruit is then sorted by hand by a crew of six to eight to remove any unripe or undesirable berries, bunches or leaves. The remaining fruit is then moved down the table into the de-stemmer and then directly into various small fermenters.